That’s too low, pretty sure WBAC would’ve given you more than that...

Understand your circumstances but sometimes it’s worth holding out for the right deal unless you desperately need the cash.

Anyways good luck with the 135i 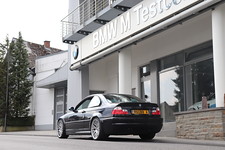 Felix79 wrote: ↑
Sun Jul 26, 2020 12:12 am
I sold my 07 Z4M with 101,740 miles last week. It is someone on here and I got hit hard on the price, but I decided it was best to just let the car go. I let him knock the price down to a pretty low price £7500 in the end, as it's not had rod bearings done and there was the potential headache of the roof being buggered. Sadly there was lots of little things I was unaware about not quite right with the car and due to my back, I can't easily do much on my car. With my last bill being £3400, I knew there was a need to put in about as much again to get it right, but it needed a possible respray (I doubt it, as my old man is a retired detailer who felt with time, the paint could be brought back).

That said, there was a lot of interest and I was offered £8200 in P/X with 2 different garages, regardless of condition, but I was putting it against a car worth £16,000+ .

I did have a good amount of interest and I don't think rod end bearings are a big cause of concern on a roadster, but with so many people treating the Z4M's S54 like a E46's, I was getting asked all the time. I knew I would get knocked down, but I had to weigh up what my car was up against and the fact I wanted to start working on getting Bertie (my puppy) use to being driven by me, without anyone holding him.

Ironically, I've managed to pick up a very well engineered (and obscenely large amount of money spent) E82 135i with 483bhp and 506lbt , as well as other bits done that I wanted to do. It was cheaper than the others I looked at and only has 75,000 on the clock. I went over to this because I am putting my Labrador puppy in the back, as the Z4M seemed too for him to jump in my lap. Thing is, he frigging refuses to get in the car and puts his paws either side of the door when I try to lift him in

I will miss my E85 Z4M, but I was never happy being in a roadster and if I had an E86, I think I might have held on to it and just use another car for Bertie.

Was the buyers name Dick Turpin by any chance?
Top

Jeez you’ve taken a big hit on this Zed

Big ends and a roof to fix is around £1k, so how did the buyer knock you so much? If it wasn’t Dick Turpin it must have been a relative

£7500 seems somewhat of a bargain even with a spend required

these cars are 14yrs old , very few are up for sale / sold requiring zero works & generally speaking most buyers are aware they need a decent budget to keep on top of things .
If you had listed it on ebay at £9950 it would have been gone in days & for close to your ask , the demand for ZMRs is healthy right now .

Who is the lucky buyer , name & shame

Not sure of his forum username, but he use to own a Z4MC a while ago.

I'm conflicted about letting it go so low, as I don't think Roadsters get the same abuse the coupe's get, but I understand why people want to do all the stuff with the S54 (headgasket, shells and other gaskets). The roof was the kicker, as of the way the frigging thing went wrong. Apparently when he got it looked at the flywheel needs replacing.

Because I do such low milage each year, it's hard for me to pick up on things, even though it's driven all year round.

Has anyone seen this?

Or this very nice MC..

Is that all 3 of 3 amarones up for sale this year!

back in Si coupe

Is Amerone a posh way of saying Burgundy

Can't see anything other than oil services every 2 years? No Insp 1 or 2. So lots to do!!
Top

I went to see this car and actually bought it. Car was very low on fuel and as the private seller was localed in a very rural local the meter gauge went down below 5miles range! Anyway managed to find a petrol station put £30 super unleaded in, when leaving the Engine management light came on, pulled over turn the engine off and the bloody thing wouldnt re-start, managed after about 5 times of waiting/turning the car over and it started still running on 50% power! I was very lucky that the guy selling offered me a full refund! It would be interesting to see if the car was sorted before going on collecting cars!

He never got back to me as I would of been happy to purchase it again if the problem was sorted!
Top

Wow....that post will massively impact it's sale potential. If the owner is on here, he'll need to get that view sorted before anyone will bid sensible money for it. Also, if you're going to list on CC you'd think you would at least detail the car properly before to give it half a chance