Every e89 owner needs to read this... Boot/water ingress...

Every e89 owner needs to read this... Boot/water ingress...

OK so, thanks to a new member, we appear to have a potential water ingress issue in the boot of the e89. Thanks to his diligence and photos there may be a widespread seal issue allowing small amounts of water into the boot. Given the numerous electronics, battery, roof motor etc reside here, I felt it important enough to raise this thread and suggest everyone with an e89 check this seal, the one outlined in the photo under the linked topic where the owner holds the seal in his hand. When checking mine, on the drivers side only, the seal is an imperfect fit, allowing a small amount of water on to the inner side of the seal.

Are we talking about the right-angled seal?
I'm going to check this out, as normally I find that the sponge that the pump sits in is usually damp. Everything else seems ok though.
Top

Excellent detective work, many thanks OP.

Here's a pic of mine. You can clearly see water on the inner boot edge of the seal. I just poured water on the car and opened the boot lid which causes water to flow between the rear windscreen and boot seal. As the water ran along the top edge, it then went under a minuscule gap under the right angled seal and dripped into the boot. So given the OP has this and I have this, I guess there is an issue. As mentioned it could be an age thing as the rubbers deteriorate. The passenger side shows a good seal but when I peeled back the top of the drivers side seal you can see dirt in there, so where there is dirt there has to be water. You need a good amount of water for this to happen, not just water present.

This is the seal, the right angle; 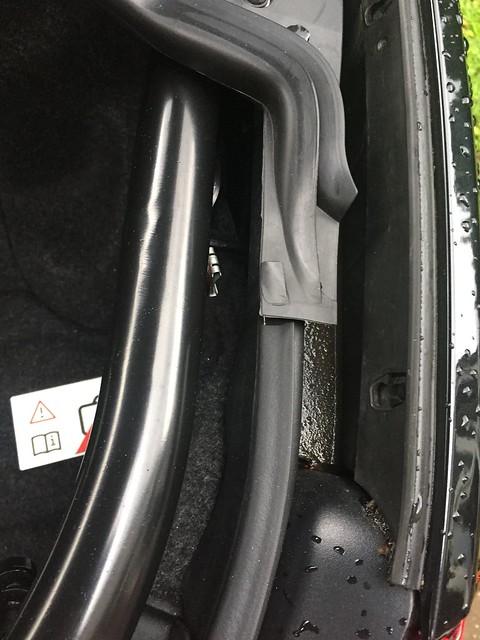 I've peeled the rubber seal back here to show you where water is getting under (and dirt). Once water is past this point, there is no secondary seal, it just runs beneath it to the nearest edge and then runs down the inside of the boot seal. 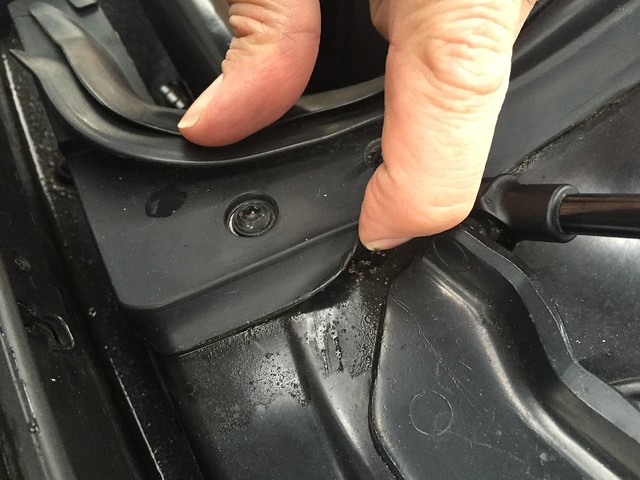 Here you can see where water has come from the top outside edge, under the flat seal and travelled along the edge between the boot lid seal and boot base seal; 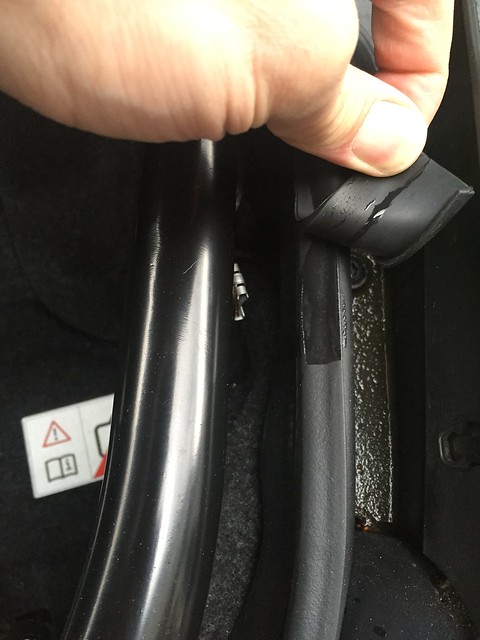 So the torx screws need to come out and peel back the seal as the OP did. Clean it up and place some new sealant here, both at the leading edge and all the edges of the flat seal to prevent further water ingress.
Top

could it be a bit of shrinkage on the older rubber causing the problem
718 4.0 GTS Boxster in YELLOW

Could be rubber ageing, could be the sealant underneath. Could just be you've not had enough water pour along the seal. In any event it's happened to at least two now, that's no longer coincidence.

I don't have water pouring in, just a drip or two and the seals around the boot lid mean little water gets to the failed deal until you open the boot and all the water runs off the boot lid along this seal. At worst the level of ingress could short out a lamp as that's where the water runs to. In time though if this fails further it could result in significant ingress just like the Op.
Last edited by Maniac on Mon May 18, 2015 8:11 pm, edited 1 time in total.
Top

Maniac wrote:Could be rubber ageing, could be the sealant underneath. Could just be you've not had enough water pour along the seal. In any event it's happened to at least two now, that's no longer coincidence.

Yep ! Something to keep a eye on

great info for the rest of us .. thanks for taking the time to post your results
Born in Yorkshire ended up in Essex .. 35is Mel red now sold
Own 2 big cats (F type & XE S supercharged) looking for a z4 Hobby Car

Thank you for bringing this to everyone's attention. It's definitely something for everyone to take note of. I would say I wonder what BMW make of this but it's a seal so we know their stance on them!
Deep Sea Blue sDrive35is - I LOVE IT! Best car I've ever owned

Once I've sealed it this weekend I'll test it and update the thread.

Again, thanks to the OP here as it looks like a design weakness that more than one of us may suffer from.
Top

How about the official BMW owners Uk club .. I wonder if they would be interested in doing this for us (which I am a member of)

So further to this I've sealed the point water could get in today with some gutter sealant, waterproof, fully removable if needed. More importantly it does the job and its black so you don't notice.

Having taken apart the rubber, it seems the existing sealant BMW placed here is not only in the wrong position to prevent this particular leak, its also degraded into powder. With this in mind as the rubbers perish, the secondary sealant won't be much help either.

So as per the photos below its easy enough to remove this rubber, place in some sealant and this should solve the problem. My guess is that this is either a faulty seal from early cars or the seal is the same and its simply perished over time.

So here is the rubber when removed, the brown is dirt and this is dirt that has made its way past the seal. You can see at the very top of the photo the area is black paint only then gets dirty as you move along the seal as water has made its way in. The seal should cover that entire dirty area. So essentially dirty water is sitting under the seal and its only way out is the boot because the secondary rubber sealant BMW have put in there has degraded.

The first job is to wipe down this area; 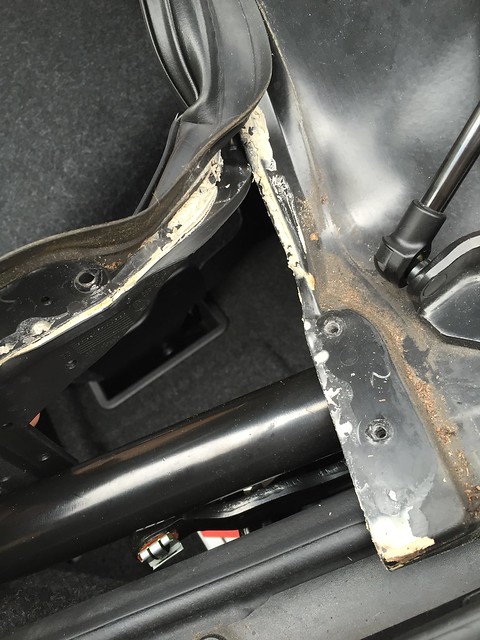 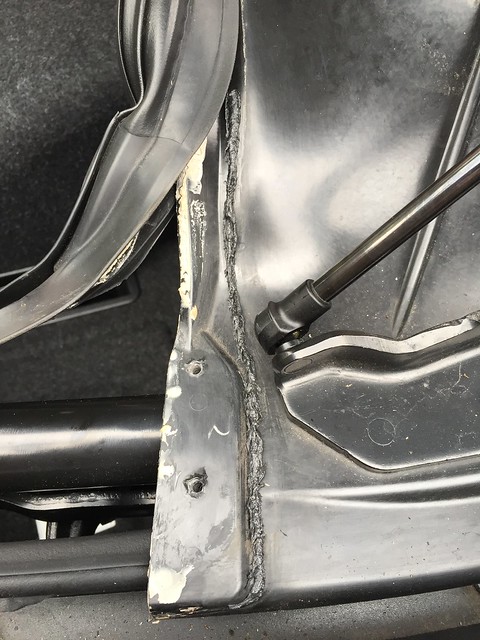 When the seal is put back, it looks like this; 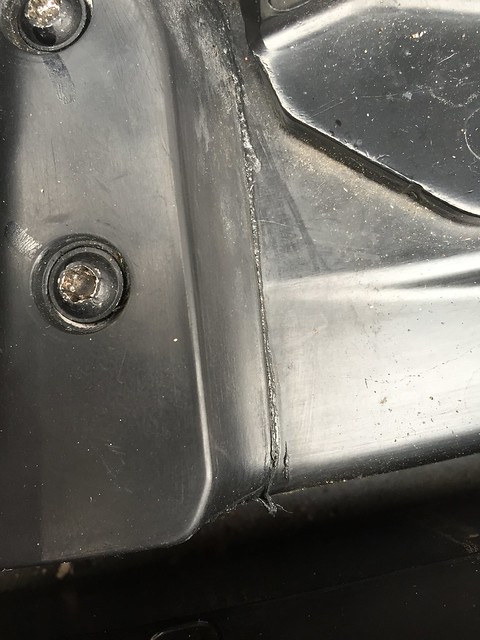 So hopefully that's that. The sealant is at least removable if I ever find the need to replace the entire seal (such as if the other side goes over time).

The beauty of owning a convertible I guess.
Top

Z4 IDM wrote:Maniac are you using a specific type or brand of sealant for this?

Practical help with great photos, thanks. I will be checking mine tomorrow before it rains!
Top
Post Reply
65 posts