Tools you will need: Tools you might need: Where to buy your starter motor:
HOW TO:

A great deal of this DIY is knowing what you're trying to remove, and how to access it. So the next few images will hopefully make this clear as not many have seen a starter before.

Figure 1 shows the two areas of the engine bay to which you will need partial access. Area A is where 99% of what you'll be working on is, and area B is just used to help slacken some cables, or pull the negative connector out* of Area A. Within Area A you will locate the starter motor, please see figure 2.

FIGURE 1: View from where the person working on the car would stand throughout this DIY

Now that you know where to find the starter motor, here's what it looks like and all the bolts and connectors you must undo.

Figure 3 shows the two bolts that attach the starter to the bell housing. Bolt 1, highlighted red, is a very long bolt in a relatively tight space, and it can be hard to locate as there are similar bolts all around the bell housing, so to make this 'how to' idiot proof, figure 4 should highlight its location. Bolt 2, highlighted green, is a much smaller than bolt 1, and it is easily located and easy to remove. 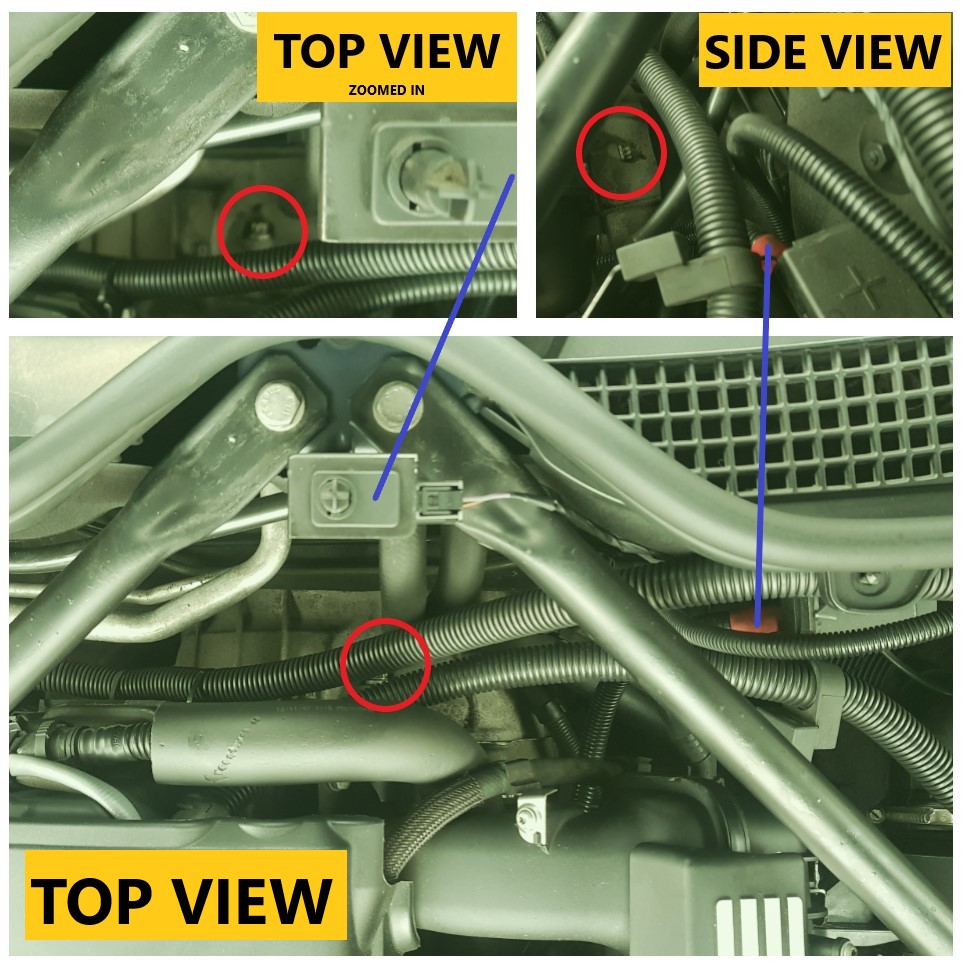 Now you should know what you're tackling, so here's a step by step that worked for me.

Step 1: Disconnect the positive terminal of your battery

Step 3: Place an E14 socket onto bolt 1, then attach your (3/8") ratchet to the socket and loosen the bolt. There's not enough space to place the socket onto the bolt whilst it's attached to the ratchet. Once the bolt is loose, undo the rest by hand. It's quicker, and you don't have enough space to finish undoing it with a ratchet.

Note that bolt 1 should be undone before bolt 2 so there's less load on bolt 1 and it can be undone by hand once loose.

Step 5: Pull the starter motor frontwards out of the bellhousing.

Step 6: Once it's out, manoeuvre the starter motor rearwards to create more room for your hands to reach the electrical connectors. You may need to use Area B to slacken the cables of the starter motor so you can move it more freely.

Visibility is poor for the next few steps, so use a torch and the space inbetween the plenums of the intake manifold to see what you're doing.

Step 7: The negative connector has a spring lock, use a flat screwdriver to lift it out of the connector. Remove it completely (it's fine if it falls, you will be able to retrieve it once the starter is out), then it can be pulled out from the starter motor with only one hand.

Step 8: Once that annoying connector is off, it may take you a while to do it with one hand, you will be able to put a 13mm socket in a 1/4" ratchet on the positive terminal. The end of the ratchet will need to poke out of one of the spaces inbetween the intake manifold plenums. Very little room to move the tool so undoing the nut might take a while. A 13mm ratchet spanner will not fit the nut.

Step 10: If your starter replacement is an identical part to the OE part, then installation is exactly the reverse of removal. If your replacement has a different negative terminal connector, then read on.

Step 11: Pull the negative/ignition cable out of the engine bay through Area B. Once you can easily work on this cable, cut the stock connector without wasting any wire length. Strip approximately 10mm of cable and place it inside the female crimp connector, use a crimping tool to crimp the connector to the wire. Wrap insulation tape around it, just leaving the very end of the connector exposed. Guide the cable back to where it should be - think you're trying to hug the intake manifold and you'll manage.

Step 12: Installation should be the opposite of removal, however, you might find it easier to install the positive wires first, being careful on how they are positioned so then the negative terminal can be connected to the male connector in the starter motor.

Amazing guide!!!! Big kudos to you for putting together and sharing

Thank you! I’ve just replaced mine by following your instructions. A daunting task made much easier, especially as most YouTube videos on it involved taking half the engine apart!
'03 3.0, angels/clear conversion, xenons, 108s, Eibachs, alcantara steering wheel
Top

kab wrote: ↑
Fri Nov 08, 2019 4:38 pm
Thank you! I’ve just replaced mine by following your instructions. A daunting task made much easier, especially as most YouTube videos on it involved taking half the engine apart!

Basic maintenance on 3-series BMWs is a nightmare in comparison to the Z-series. Glad this helped someone.

My son is replacing mine next weekend and he suggested I look on here first to see if there is a way of removing it without taking off the manifold. This guide is great, thank you so much. Should make his life a lot easier.