I've fitted these on your advice John, initially front only as I had recently changed the rear pads when the bushings arrived from the States. I've only been to Thruxton so far since fitting both front and rear.
If you've been there, you'll know it's far less demanding of the brakes than shorter more technical circuits. Even though the speeds attained are far higher (100mph+ through Goodwood, Village and Church, topping out at over 140mph at the end of Woodham Hill approaching the second gear Club Chicane), there's plenty of high speed track distance between the heavy braking zones which allows the brakes to cool. The brakes behaved exactly as they should - consistent pedal feel and no hint of overheating.
For the few airfield track days I did with only the fronts fitted, again I had no brakes issues. I have a couple more track days lined up soon, so I'll get a better feel how the brakes behave under greater duress.
So far, I'm pretty pleased as the inconsistency of pedal feel I'd previously experienced from very hot brakes seems to have lessened.
In my garage, I have several used sets of pads with varying amounts of friction material remaining. When I next change my pads, I'll be able to give a comparison of wear patterns before and after changing the bushings.

excellent mod Imo. Got to make a difference too.
Top

Just from the even wear alone you can tell that's it's doing its work. If I haven't had a BBK installed I would do this as well.
-- http://www.freerice.com/ For each answer you get right, they will donate 10 grains of rice to the United Nations World Food Program --

I lubricate mine with every pad change (about 3 to 4 times / year). Wear is even on the pads, while with the original bushings I had differences in thickness of the pad material after an intensive track day.
Top

I couldn't find any from this side of the Atlantic but they seem to be worth the money.

Scooba_Steve wrote:Any good links for picking them up? Prices from the US are too steep.

I've just done a quick search on ebay and found these for you: http://www.ebay.co.uk/itm/BMW-Solid-Bra ... 43dfd8ca6d At £37 they are a very effective mod.

Just check with the seller that they will fit your car. See if you can make a "best offer" that the seller will accept, or alternatively, ask the seller if they will sell the brass bushes and cir clips on their own, without the pins (use the ones presently in your brakes), so you can get them even cheaper.

Question! I have ordered a set of caliper bushes, but i got 3 instead of 2 bushes in each package. 2 (soft) rubber bushes & one (hard) teflon bush. (as seen in the middle in the picture below). 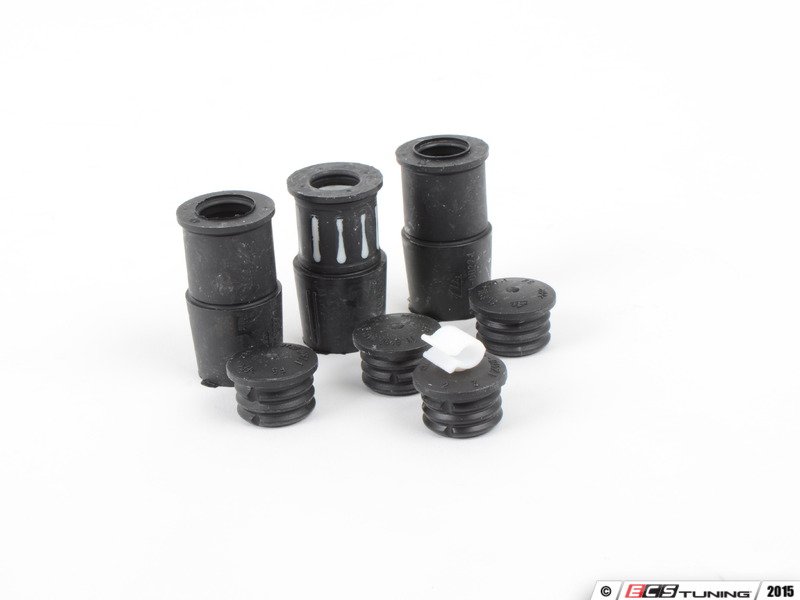 I opted to go with the 2 rubber bushes but after about 800 miles driving with the new bushes (and overhauled brakes) i'm feel the brake pedal is too loose. Don't want to go the brass route

If i fit the hard teflon bus (1 on each caliper) should i replace the upper or lower rubber bush???
Top

follow up: i've replaced the lower bush on the car for the harder one, as seen in the middle in the picture above, and the pedal went instantly firm(er). wanting to do the upper bush also now