Got the splitter finished over the last week or so. I always seem to be juggling 3 jobs at once, but it does keep things interesting!

Based largely on my effective RX8 splitter (which went through 3 different iterations), the splitter itself is *hung* from the front crash structure on steel wire. There are two benefits to this:

1. It deflects upwards in the event of hitting something (like a kerb, or the end of my trailer!)
2. It is easily adjustable, because the angle of the splitter is critical

So £30 later I have a bunch of balustrade fittings, and some go kart brake linkages (small clevis clips).

Then it needs paint for the untreated wood, end plates for show, an air dam to keep air from passing under the bumper, and a deflector to keep air from passing under the radiator. I reused the rubber strip on the OEM undertray to seal against the radiator. This still allows for some adjustment/deflection of the splitter. All told, it's about 8kg but it will provide far more in terms of laptime than the loss due to weight gain.

And finally, because I might have to make another due to damage, I made a template from some 5mm plywood

ours is similar but on hard mounts to the bumper iron 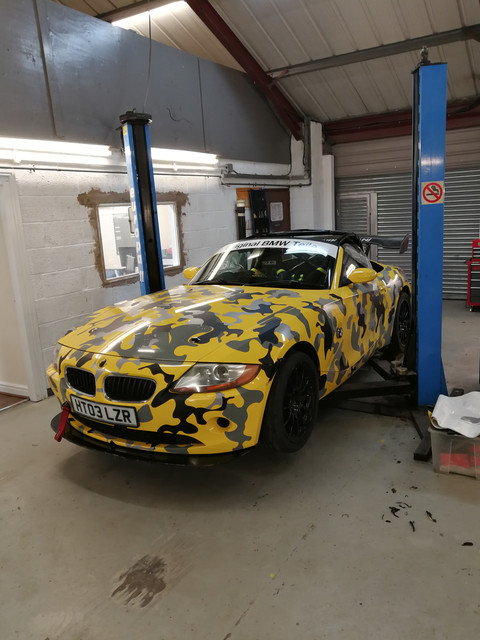 Nice wrap! Wish I had a lift…

Nice lift, yeah could use one of them,

hell a garage would be a nice start for me too.

Rear wing should arrive tomorrow but will need a custom mounting solution so watch this space.

The big job recently has been rebuilding the diff with LSD unit. I've replaced crownwheel and pinions before but not done a full rebuild with new bearings, shims, etc. BMW don't sell a rebuild kit but I got great service from https://www.bearingkits.co.uk/ with a kit that included all 4 bearings, instructions and preload measurement tool.

Before removing anything I measured the backlash at 0.10mm. More on this later.

Removed the crownwheel from the OEM open diff, degreased the bolts, cleaned the threads and fitted to the LSD unit. Difficult to torque the crownwheel bolts correctly so estimated it by torque angle using my big impact gun.

Removing the old bearing shells from the casing was also tricky. There are two bearing sets for the pinion: small one nearest the propshaft, and a larger one further inside. The small one was easy to drift out but the large one less so. Can't get a drift on the bearing shell perpendicularly - needs to be at an angle. Tried to use my puller from the other side but broke it. Eventually a bigger hammer and modified drift (with a step cut into it) did the job.

The final job before reassembly is to remove the inner bearing races from the pinion itself. There is no way to press them off, and I don't have a bearing splitter. So *very* carefully I cut a groove with a Dremel until I didn't dare go any further. One tap with a hammer and it slid forwards. Happy days!

Reassembly starts with the bearing shell in the casing. I pressed them in straight from the freezer to minimize the strain on the casing. Same for the inner races. Here you can see the frosty ball bearings!

Pressed the pinion into the case using the hydraulic press, which in hindsight was a mistake, but I got lucky and ended up with a pinion depth within 0.1mm of how I had measured it before disassembly. Also forgot to measure the preload before fitting the LSD, but it felt OK when turning by hand. I do find it easy to rush ahead when things are going well.

Fitting the LSD unit into the diff casing was a real PITA. Basically, it's too big - won't fit. The only way is to take it apart and reassemble it back inside the diff casing! That's not too bad, you might think, but it needs to be removed to adjust the shims to set the backlash, and there are 12 bolts that hold the LSD together. The Kaaz LSD came with several shims for this purpose. The shims sit behind the inner bearing races which need to be pulled/pressed back onto the unit every time you change a shim.

After a couple of goes, I had a backlash just within tolerance (0.05mm) and settled for that. Applied engineer's blue to the crownwheel and checked for pinion pattern - pretty good.

I was all set to fit the oil seals when I noticed that one of the driveshaft bearing circlips was not fully home. Tapped it in with a hammer and immediately noticed that I couldn't hear any backlash any more. That tiny change had pushed the crownwheel right onto the pinion with a perfect mesh. Damn! I was going to have to adjust the shims again. But without any backlash there wasn't any free play, so the circlips wouldn't budge. Very pissed off at this point - the reassembly has taken an entire day. Nothing I can do, so I decided just to complete the reassembly and hope that a little use will settle the bearings into position and it'll be fine. However, chances are that as the diff gets hot it will get very stiff. So I expect I'll be adjusting the shims again soon. But for now I've sealed it up and thrown it back on the car.

Bloody hell. Not looking forwards to that job mate..

Good on ya for doing it yourself.. not sure if I can do that, and haven't got the equipment. Nice unit by Kaas, looked at them myself.
What ratio did you go for on the crown and pin?

Looks like it's all coming together nicely Liam, can't wait to see what you get up to next.

Didn't sit right with me all week and when I got back under the car yesterday I noticed a small leak from the O/S driveshaft seal.

The diff is now back on the bench, seals back out, so I'll do the shims/backlash again. Properly this time.

The only snag is the side circlips are so tight in the groove that my new heavy duty circlip pliers are twisting instead of compressing the circlips. Better tools needed.

To cheer myself up I had the carbon roof fitted. 3.6kg saved.

If you peer through the windscreen you can also see the new door cards.
Liam's Z4C race car project
Top

Managed to get a new pair of side seals from my local BMW dealer the day before lockdown. Bearing shims were not so easy. Found a supplier in Lithuania on eBay so ordered a couple of thinner versions in 0.15mm steps.

Super heavy duty circlip tool ordered from eBay and that did the trick. Nonetheless, I still needed to tap the circlips out of their grooves with a hammer and punch, it was that tight!

In my previous efforts to gain some backlash by pulling down the pinion, I had over-tightened the pinion nut so had to remove the LSD unit to measure the free rotational torque. In doing so I managed to let the internals of the LSD fall out of the open casing and spill all over the workbench and floor... This job has been a trial of mental strength, I can tell you!

After making sure I had all the pieces I then had to clean everything and figure out how to reassemble. Thankfully Kaaz USA has some useful YouTube videos of the internals. Here it all is

Fixed the rotational torque and put the LSD unit back in with the thinner shims. 0.12mm backlash - perfecto!
[youtube]https://www.youtube.com/watch?v=zasDbsvzJv8[/youtube]

It is back in the car now (all 34kg of it!) and so far it looks like its not leaking either. Finally I can get on with the rest of it!
Liam's Z4C race car project
Top

Congratulated myself with a short drive (a mile or so). Cleared all the logged faults and gently trundled to the end of my road and back to check for faults, noises, etc. All good, except the low coolant light came on. Parked up at home, checked all round for coolant leaks - all good.

Put my head under the rear to check for diff leaks. All good, but then I head a loud pop and steam everywhere! Shut off the engine and found the heater bypass hose had popped off under pressure. These push-fit hoses are a PITA!

Refitted the hose taking extra care to ensure it is fully home. Topped up the coolant and ran it for 15 min. All good. I like this electric water pump - it stopped pumping when the pressure dropped, and I needed less than 2 litres to refill.

Now onto door cards! A much easier job...

I bought some black ABS plastic door cards from the roll cage supplier (standard fit on ZCars race series so I thought it would save me some time).

The quality wasn't very good, and designed to be riveted in place. I know from experience that rivets are a bad idea on door cards.

So I ordered some 3mm aluminium composite sheet instead. A1 size is just big enough. The tricky part is cutting out the right shape for door handle and window switches. I also picked up all of the existing threaded holes in the door. A few extras were added with rivnuts.

Before anyone has a go at me for unnecessary journeys. If I break down, I will recover the car with my own trailer.

And I live in the middle of nowhere!
Liam's Z4C race car project
Top

Doors are tricky not sure what to do have removed cards and handles but not replaced them with anything as yet. Door is not flat so will always look odd

glad you got the diff sorted mate, that must be one hell ova relief.

can't wait to see what you tackle next.

The spec for your seat has the upper width at 560mm, which is pretty wide.

I'm looking at a Z4 Roadster for track/sprint work, and would be looking at running similar width seats. I realise it's chalk and cheese, given how much you've stripped, but do you have a sense for how your shoulder parts would have fitted with door cards and centre cubby/console in place?
Top
Post Reply
274 posts